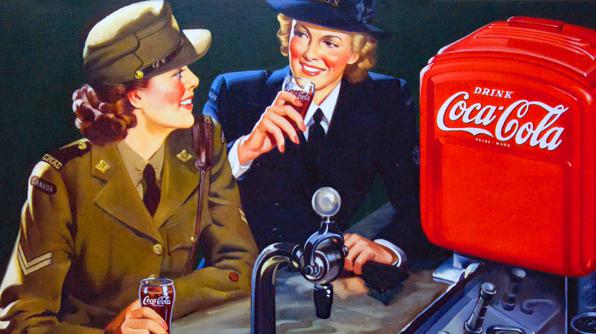 At the outbreak of the Second World War, Coca-Cola was bottled in 44 countries, including those on both sides of the conflict. The war took a devastating toll on Canadian families as their loved ones left to fight and serve overseas. Coca-Cola has a proud history of supporting men and women in uniform and in the 1940s the Company was determined –in whatever small way it could –to offer those brave men and women a small reminder of home and happier times.

Coca-Cola in Canada saw employees leaving to enlist in the war and experienced rationing of the daily essentials for the business.Rubber and gasoline proved hard to come by making deliveries of Coca-Cola difficult.Sugar rationing across Canada slowed production in many plants with one in Alberta completely closing over the lack of ingredients. Finally, a special tax during the war forced the cost of a Coca-Cola to increase by one penny –an increase of 20 per cent. Throughout Canada and North America, the Coca-Cola business was affected by the war.

Yet, the entry of the United States into the war brought an order from The Coca-Cola Company president Robert Woodruff in 1941 “to see that every man in uniform gets a bottle of Coca-Cola for five cents, wherever he is and whatever it costs the Company.”Despite the difficulties, Woodruff knew that Coca-Cola could support the war effort.He found out just how important two years later when a special cablegram arrived at theCoca-ColaExport office in New York City.

The effort to supply the armed forces with Coca-Cola was being launched when an urgent cablegram arrived from General Dwight Eisenhower’s Allied Headquarters in North Africa. Dated June 29, 1943, it requested shipment of materials and equipment for 10 bottling plants. Prefaced by the directive that the shipments were not to replace other military cargo, the cablegram also requested shipment of 3 million filled bottles of Coca-Cola, along with supplies for producing the same quantity twice monthly. Within six months, a Company engineer had flown to Algiers and opened the first plant, the forerunner of 64 bottling plants shipped abroad during World War II.

To build those plants a special group of Coca-Cola employees called Technical Observers (TOs) were asked to plan the logistics to install the plants and get the bottling started.One hundred forty-eight men served as TOs, complete with Army officer's rank, pay and uniforms that had a unique identification patch. One such TO was John Talley, an American who at that time had spent his entire Coca-Cola career in Canada working in Toronto, Winnipeg, Port Arthur and Windsor.

John Talley arrived in Europe in 1944 and was first set with the seemingly impossible job of establishing bottling operations in a newly liberated Paris. Against all odds Talley managed the feat and went on to set up bottling plants across the American zone of occupation in Germany.TOs like Talley supervised the shipment and operation of the 64 complete bottling plants that distributedover 5 billion bottles of Coca-Cola to servicemen and women.

But the presence of Coca-Cola did more than just lift the morale of the troops. In many areas, it gave local people their first taste of Coca-Cola—a taste they obviously enjoyed. And when peace returned, the Coca-Cola system was poised for unprecedented worldwide growth. From the mid-1940s until 1960, the number of countries with bottling operations nearly doubled. As the world emerged from a time of conflict, Coca-Cola emerged as a worldwide symbol of friendship and refreshment.

Justine Fletcher is an archive specialist at The Coca-Cola Company and is currently helping Coca-Cola Canada celebrate 120 years of refreshing Canadians as part of Canada 150.