Coca-Cola tonight unveiled new packaging graphics that unite all Trademark Coke products – Coca-Cola, Diet Coke/Coca-Cola Light, Coke Zero and Coca-Cola Life – under a single visual identity system anchored by the iconic Coca-Cola Red Disc. The new packaging debuts next month in Mexico, and similar versions of the Red Disc graphics will roll out into additional markets throughout 2016 and into 2017.

We caught up with James Sommerville, VP of Global Design for Coca-Cola, to learn more about the thinking behind the new look and how his team brought it to life.

How do these new designs support the company’s ‘One-Brand’ strategy?

They represent another jigsaw puzzle piece – and a very tangible one – in our “One-Brand” strategy. Packaging is, in essence, our most visible and most valuable owned media asset. While TV commercials, digital communication and billboards are extremely effective and important, consumers physically touch a Coca-Cola bottle or can.

These new packaging designs signal a shift in our visual language in which the classic Red Disc is more prominent than other elements associated with the brand. By applying the disc across the Coca-Cola Trademark, we’re using a signature asset in a contemporary and surprising way to share the equity of Coca-Cola across all trademark products. Consumers will see the Coca-Cola Red Disc in all global markets at the end of our “Taste the Feeling” TV ads, in our print ads and on our billboards. Using this same device on packaging completes the picture. Although the Red Disc is not always presented in exactly the same way – whether it’s placed around a pack or animating in a TV ad – the result is a consistent brand signature that refreshes our familiar Red Disc icon, yet applies it in a systematic and modern way. 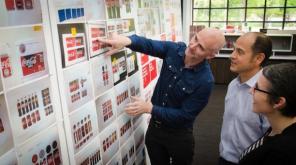 What were your overall objectives when you started this project?

Refreshing Coca-Cola’s packaging is a huge design challenge. Above all, it was critical for the final solution to communicate the “One-Brand” strategy. We also set out to build on the core design principles of being bold and leveraging the power of red, while preserving our simplicity and iconicity. During our design process, we saw the Red Disc as the one design element that could unite the trademark visually.Coca-Cola, any Coca-Cola is refreshing, uplifting and delicious… and the presence of the Red Disc on our new packaging communicates that message. This also marks the first time in our 130-year history that Coca-Cola’s visual identity system has been shared across not only all media, but all Trademark products. We’ve been asked why we didn’t focus more on the iconic contour bottle, Spencerian Script or the Dynamic Ribbon device. They are all very important to the Coca-Cola brand identity system, and will continue to play a key role in Coke’s visual identity, but we believe the disc leverages our unique heritage, in a contemporary and timeless way while also using a universal shape.

What’s the history of the Coca-Cola Red Disc?

It was first introduced in the 1930s on hand-painted Coca-Cola advertising. Over the years, it became synonymous with great taste, uplift and refreshment. In 1947, the creative director at D’Arcy Advertising, Archie Lee, purified and systemized the Red Disc used then for retail signage to signify that real Coca-Cola was sold there. The disc, therefore, became the inspiration for our approach to the “Taste the Feeling” campaign signature that we introduced in January, and now these new packaging designs also communicate that Coca-Cola, any Coca-Cola is the real thing. 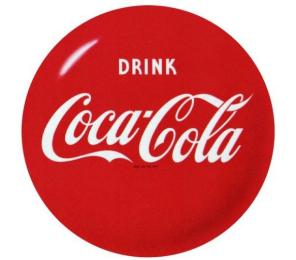 So the disc lends itself to packaging design more so than other iconic Coke design elements?

It does, yes. The beauty is that the disc is red, and consumers know this means great taste and refreshment, representing the full range of Coca-Cola products.  Executionally it applies easily to the cylinder of a can or bottle, the square or rectangular shape of a fridge pack, and so on. But this new packaging does not create a “matching luggage” look. It’s a modular design device that will be applied individually across all global packaging templates and adapted to all printing techniques. When you see the lineup, you see a common language, a single voice – but used in different ways depending on the treatment, environment, country and context.