The Company is very excited to welcome Life to our family of over 300 beverages available in Canada, more than 70 of which are reduced-, low- or no-calorie. First introduced in Argentina and Chile in 2013, Life offers great taste and contains 50% fewer calories than regular colas (that’s 70 calories in a 355 mL can).

Coca-Cola Life is sweetened with a combination of cane sugar and zero-calorie stevia extract which gives it the great taste Canadians know and love. We’re so excited about the launch of Life in Canada that we want to share it with the country, and thanks to a massive sampling program one million Canadians will get a chance to do just that.

With the addition of Life, the Trademark here in Canada now boasts four fantastic colas. These four beverages provide variety and choice for Canadians when it comes to finding a refreshing drink that suits their lifestyle.

“We want to be leaders in providing Canadians with beverages that meet their needs and lifestyles, and Coca-Cola Life is part of our efforts to provide that choice,” explains Michael Samoszewski, Vice President, Sparkling Business Unit, Coca-Cola Canada. “And Life is a great tasting option for consumers looking for a reduced-calorie soft drink sweetened from natural sources.” 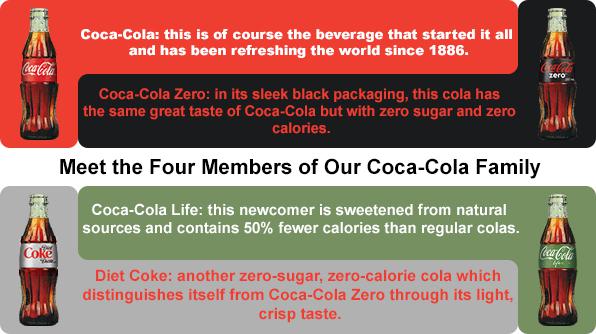 Stevia, a sweetener with zero calories, is obtained from the leaf of the stevia plant. The stevia plant from the chrysanthemum family is native to Paraguay. Its leaf is a unique source of intense, natural sweetness. The stevia we use is part of The Company’s portfolio of sweeteners and supports our innovation strategy. Sweeteners made from stevia leaves are 200 - 350 times sweeter than table sugar (sucrose) and are calorie-free.

You may be surprised to hear that Life is not the first beverage in Canada to feature stevia leaf extract. In fact, some Core Power, NESTEA and glacéau vitaminwater products already make use of this terrific sweetener.

Coca-Cola Canada introduces latest innovations at #SummerofCocaCola party, including new almond beverage, sparkling water and others to their portfolio
How Brands Make it to the Big (or Small) Screen
fairlife Ultrafiltered Milk Coming to Canada
Related Stories
EXPLORE JOURNEY