Last month Refreshments Canada (CCRC) held the official unveiling of several major plant upgrades at their Lachine bottling facility in Montreal. The most exciting of these improvements was a brand new, state-of-the-art in-line blow moulding system. This important innovation makes Lachine the third facility in Canada currently with this revolutionary process alongside CCRC’s plant in Brampton, Ontario and Calgary, Alberta.

For those of you not up-to-date on the latest in beverage manufacturing technology, in-line blow moulding is the process by which compact PET preforms are transformed into complete PET beverage bottles. In Brampton and Calgary, the full-sized bottles are immediately whisked away to a separate filling station whereas at Lachine the bottles are filled in the same process. The single step – expanding and filling system – makes Lachine one of only a handful of facilities in North America with this capability. 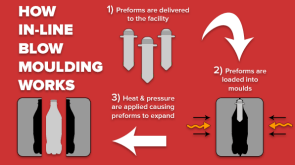 With these important investments in Lachine, Brampton and Calgary, CCRC has been able to make significant gains in productivity. In Lachine where the new process has replaced two older conventional PET lines, the plant has been able to double its output to a staggering 900 bottles per minute.

Coca-Cola and the communities of Montreal, Brampton and Calgary are also enjoying significant environmental gains thanks to the new system. Both plants’ greenhouse gas emissions from transportation have dropped dramatically as one truck load of preforms is now able to replace 10 loads of full-sized PET bottles. Lachine’s high efficiency in-line blow moulding system is also resulting in substantial impact on the plant’s use of water with a reduction of roughly 25 million litres a year!

Watch the video below for a tour of Lachine’s in-line blow moulding system with Plant Manager, Danielle Nguyen:

Coca-Cola in Canada reaches 100% water neutrality
Looking Back as We Move Forward: 121 Years of in Canada
“Exporting Best Practices Around the World”: Sarah Dearman Discusses Canada’s Part in Coke’s Vision for a World Without Waste
Related Stories
EXPLORE JOURNEY