Take a look around Bill Cook’s room full of memorabilia and it’s hard to figure what he needs to complete his collection.

Ask Bill and he knows, “A Hutchinson bottle.  Those bottles weren’t used here in Canada.”

That I can’t help him with.

What else does he want?  With a smile he says, “A visit to the Archives in Atlanta.”

Now, there I can help him.

Bill has been the President of the Ontario Collector’s Club for the past 20 years and a picture of his collection is featured in the book Canada’s , Refreshing the Nation for 120 Years. The book, along with a limited-edition commemorative six-pack, was developed to help celebrate Canada’s 150th birthday and ’s long and proud history here.  During my visit to Canada to help celebrate Canada 150th, I just couldn’t leave without a visit with Bill.

Bill’s love of all things Coke started in his 20’s when he started collecting all kinds of soda bottles.  He purchased his first door bar and he was hooked.  He sold off his bottle collection and started to collect items exclusively.  In fact, he had just purchased a collection the day before I visited with him.

A sign painter by trade, Bill has a real appreciation for the metal signs that he collects. In fact, his favorite sign is on the wall of his Coke room, and is unique because of the “at our fountain” text.  But, Bill is pragmatic about his collection, “I buy and sell parts of my collection. I try to buy pieces for local collectors who can’t travel to conventions, then sell them items when I return home.” 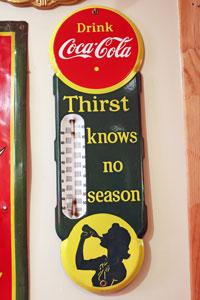 But his collection is more than a business to Bill, “I have a family.  Those are the people I meet every year at conventions.  What I do is more than buy items, I have life-long friends because of and my collecting.”  In fact, Bill and another collector, Oscar Segovia, have held seminars at conventions on how to identity fake signs.

While I looked around his collection, I was struck by the quality of the Coke items he had.  I especially loved the Canada signs and red discs that have a yellow dot on the bottom.  I noticed some large bottles that I had never seen before.  Those were uniquely Bill’s.  He paints large glass contour bottles in the winter time when the weather keeps him inside. “I never figured out how many hours it takes me to paint those.  I’ve sold a few and more people have seen them and contacted me about buying one.”

As I left the book and a commemorative Canada 150 six pack behind for his collection, we discussed the upcoming Annual Convention in Orlando in August.  I also made him a promise, the next time he is in Atlanta, I’ll make his memories complete – a visit to the Archives.

Justine Fletcher is an archive specialist at The Company and is currently helping Canada celebrate 120 years of refreshing Canadians as part of Canada 150.