Minute Maid in Canada: How Canada's Number One Juice Company Came to Be

After reading this article, you may never look at your morning Minute Maid orange juice in quite the same way again. With a history stretching all the way back to Central Florida in the closing days of the Second World War, right up to present day Peterborough, ON where a friendly Minute Maid plant is serving up juice all across North America. What once seemed like a refreshing glass of Minute Maid goodness will soon become a whole lot more.

“During the Second World War, there was a great need for vitamin C to keep soldiers healthy,” explains Fran Mulhern, Vice President and General Manager of the Minute Maid Company Canada Inc.. “Not only did it have to be in a form hardy enough to survive the trip to the front lines, it still had to be appetizing when it got there.” Enter the Florida Foods Corporation in 1945, which had developed a delicious orange juice powder made from real oranges. Although Florida Foods Corp won a contract to produce 500,000 pounds of powdered orange juice for the US government, the war ended before the contract was completed. 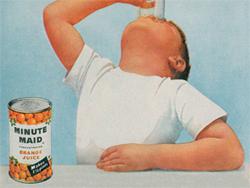 “As the war ended, Florida Foods Corp discovered that there was a domestic demand for great tasting orange juice in the months when fresh oranges simply weren’t available,” Fran continues. “The following year Florida Foods Corp renamed itself and released a new, frozen concentrated orange juice called Minute Maid! The name actually helped describe the new formula because with only 80% of the oranges’ water removed, you could mix up a pitcher of orange juice from frozen concentrate in under a minute.” In a few years, the product became so popular that the company adopted the name for itself and later expanded into Canada. By 1960, Minute Maid had become a household name. This popularity drew the attention of yet another household name and later that year The Company acquired Minute Maid, which served as the Company’s first foray outside the soft drinks category.

It’s at this point, as Minute Maid joined the family, that the city of Peterborough enters our story. has proudly been a part of the Peterborough community since 1948, in fact we’ve been at the same site since we first arrived. Peterborough is now home to our only Canadian Minute Maid plant, which has been constantly expanding and evolving since the first cans of frozen concentrate rolled off the line back in 1985. Today many of the Minute Maid products you’ll find in fridges and freezers across Canada and the US had their start in Peterborough. 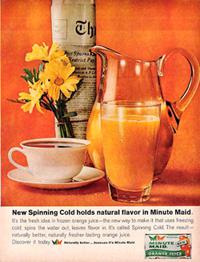 As you can imagine, it takes a lot of hard work to keep up with Canadian juice demand. To meet this demand our production lines are capable of keeping an incredible pace and can fill a staggering 900 cans a minute when running full speed. Fun fact: if you took all the concentrate produced by our Peterborough plant last year, you’d be able to make enough juice to flow over Niagara Falls for nearly an hour and a half!

With nearly 95% of all Minute Maid sold in Canada also being produced here, you can see just how deep a Canadian tie there is to that glass of orange juice. Though Minute Maid may have started as a brainchild of the Citrus Belt in the heart of Florida, today it is very much at home at the gateway to the Kawarthas in Peterborough.