What does a mural in a small town of 2,200 people in rural Missouri have in common with the Disneyland Resort in Anaheim, California? The answer is simple: Walt Disney.

While Disneyland has played host to hundreds of millions of guests since it first opened in 1955, most of its visitors don’t realize the role that one small town in particular played in the park’s inception. For The Walt Disney Company’s most devoted fans however, the town of Marceline, Missouri holds a special place in their hearts as the boyhood hometown of Walt Disney, the company’s iconic founder. Though the Disney family only briefly lived in Marceline, a scant four years, Walt himself often recalled his time spent in the community as a boy as the most influential and significant in his life. When the time came to construct Disneyland, Walt referred back to his fond memories of Marceline regularly for inspiration.

At the heart of present day Marceline is the Walt Disney Hometown Museum, an intimate and privately-owned institution headed by Executive Director Kaye Malins for whom the venture has been a labour of love since it opened in 2001. Through a spectacular collection of unique artefacts, wonderful interpretive exhibits and a team of intensely passionate volunteers, the Walt Disney Hometown Museum works tirelessly to share the story of Marceline’s impact on Walt Disney, a man who in turn had a tremendous impact on pop culture.

Back in July 2015 the museum’s Creative Director, and Toronto-area native, Peter Whitehead reached out to an old friend, Canada’s Vice President of Public Affairs and Communications Krista Scaldwell to share an interesting story he had come across concerning a faded old mural off the town’s main street.

“Through some research, the museum had discovered that the mural had likely been put up around 1906, the same year the Disney family had arrived in Marceline,” Peter said. “Given the small size of the town, the painting of such a mural would have been a big event for local children to gather and watch.”

The momentous occasion would have probably been a big influence on a young, artistically-minded boy like Walt Disney. “In fact we know that Walt was aware of the mural in Marceline,” Peter explains, “because for the rest of his life he would refer to the Zurcher building that hosted the mural as simply ‘the Coke building’.”

In 1942, Disney promoted its animated film Saludos Amigos using The Pause that Refreshes on the Air, a sponsored radio program. One Hour in Wonderland, Disney’s first television show, aired eight years later and also functioned as ’s second television advertisement ever. By the 1950s Walt Disney Productions and The Company had partnered on many projects, so when Disneyland was finally announced, chose to participate through ’s Refreshment Corner. Reminded of the “Coke building” from his beloved Marceline, Walt personally insisted that the Refreshment Corner be styled after the Zurcher building in his hometown.

“What Walt didn’t realize was that by the time Refreshment Corner was being constructed, the mural in Marceline which had served as its inspiration, was long since gone,” says Peter. “It turns out that sometime after the Disney family had moved away from Marceline, the owners of the [Zurcher] building had added an extension to the building, hiding away the mural.”

For decades the connection between the Refreshment Corner and the Zurcher building was a mystery to and Disney historians alike, the reason behind why Walt had dubbed it “the Coke building” seemingly lost forever. In the early 2000s however, a fire destroyed the extension but spared the main building allowing the mural’s faint remnants to see the light of day once more.

Upon hearing the mural’s story, Krista was immediately taken with it and asked to share it with colleagues working in Atlanta. Ted Ryan, Director of Heritage Communications and Ken Schroeder, Senior National Sales Executive for ’s Disney division were quickly contacted and soon it was decided that this important piece of shared and Disney history should be restored as soon as possible.

That fall Best Bet Arts & Media out of Roanoke, Virginia was contracted by The Company to go to Marceline and restore the mural. The team from Best Bet spent a gruelling, bitterly cold November of 2015 outside on their scaffold painstakingly returning the work to its former glory. The mural quickly captured the attention of the town just as it had when it was first installed back in 1906. “The town was abuzz about the mural when work began. At first no one knew what was happening… Once it became clear the Coke mural was being restored, people would often drive past just to track how work was progressing,” Peter shared. 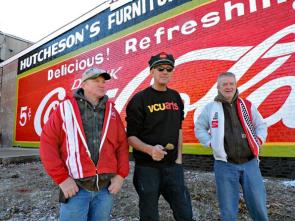 By the end of November the restored mural was ready to be presented that Christmas to The Walt Disney Company as a token of appreciation, representing the two companies’ nearly 75 years of partnership and collaboration. In fact ’s Refreshment Corner in Disneyland is in many ways a living example of that collaborative spirit; thanks to its success, similar venues hosted by now operate at other Disney theme parks around the world.

Today the story of the renewed mural is very popular with visitors to Marceline. “People in the museum love the story,” Peter Whitehead reports. “Hundreds of people visit the Coke sign every week after hearing about it.”