Whether it’s a single drop in a pond or a mighty swell at sea, water’s ability to transform, devastate and sustain life is remarkable. It’s the great equalizer. We all need it, which is why it matters so much to Canadians.

March 22nd is World Water Day. This annual event is about celebrating the important role water plays in our lives – and taking action to address the many water-related challenges we face. From too much to not enough, pollution or access, water is a complex issue. It’s precious, volatile and fragile all at the same time. Canada has approximately 7 per cent of the global supply of renewable freshwater. Together, it’s our responsibility to take care of it.

Coca-Cola has made water stewardship and replenishment a key component of its sustainability efforts. By supporting Ducks Unlimited Canada’s wetland conservation efforts, is making a difference in the future of our most precious resource. To date, has funded the protection and restoration of 363 acres (147 hectares) of wetlands, representing 242 million litres of water stored. Efforts like these are some of the best things we can do to keep our water clean, safe and accessible.

Many Canadians don’t know that wetlands underpin almost every aspect of our water’s health. Wetlands naturally filter harmful nutrients and pollutants from water as plants take many of the harmful substances into their roots and change them into less harmful ones. Pollutants may also be buried in wetland soil, where bacteria and other microorganisms break them down. Wetlands also play a significant role in flood prevention by acting as sponges that capture, store and slowly release water over a long period of time. And by collecting precipitation wetlands also help recharge groundwater. 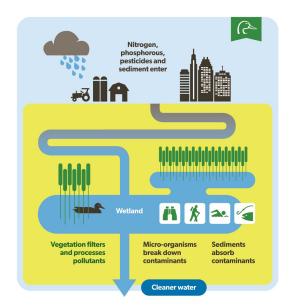 Despite the critical role wetlands play in the health of our water, they are among the most threatened ecosystems in the country. Up to 80 acres are lost in settled areas of the country every day. Ducks Unlimited Canada is working alongside concerned partners to reverse this trend and keep our water safe and healthy.

25 Years After ‘Philadelphia’: and (RED)® Release Featurette Charting Progress Made in Fight Against HIV/AIDS
“We Want to Be Part of the Solution”: Coke North America’s Sustainable Packaging Lead Talks World Without Waste
Jason Derulo, and Walmart International Team up with One World Play Project to 'Pass the Happiness'
Related Stories
EXPLORE JOURNEY